Up On the Roof & Down in the Temple

The roof of the Metropolitan Museum of Art is one of the least touristy parts of the museum, namely because 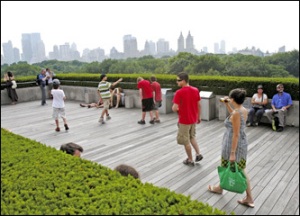 tourists don’t realize that as New Yorkers, we utilize every available inch of space — even in a museum. Right now the Iris and B. Gerald Cantor Roof Garden is holding an exhibition called “Jeff Koons on the Roof.” This past Friday I headed uptown and walked across park to meet a friend for drinks & to check out the giant 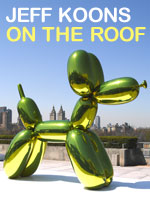 “balloon dog.” Though we expected the roof to be packed, it was filled with a surprisingly mixed crowd of people: young and old, post-work, pre-dinner crowd. The art lovers, the downtownies, uptownies and even the borough people. It was really amusing to stand with a glass of wine in the setting sun, surrounded by a 360 degree view of Manhattan and a sea of people to watch. After an hour of taking in the views and conversations and lamenting on the future of a publishing house, my friend and I headed down to the Temple of Dendur, before heading further uptown to dinner at Sarabeth’s.

The temple, which is housed in the Sackler wing, is one of my favorite rooms in the museum. My first memory of the temple room was when my mother took my sister and I to the Met. I was ten and my sister was six years old. Every time we went to the Met, we were treated to a new “wing” or period of art. That particular dreary March day, my mother decided we were ready to tackle the Egyptian art. Two hours later, after reading almost every placard, gazing at every vase, piece of jewelry and mummy, we finally worked out way to the temple. Weighed down by two very cranky, hungry, thirsty children, my mother was determined to get us through that one last room. As 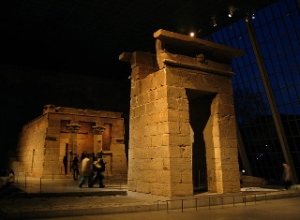 tantrums set in, she told us, “if you don’t see this temple today, you won’t be able to ever see it again. It’s a temporary exhibition.” Even then, I was never one to miss an opportunity, so I reluctantly agreed. My sister agreed after being bribed with the promise of candy. That day, we spent an hour at the Temple of Dendur, my mom reading every card, fact and date out loud to us. She set the scene visually, making us imagine the Egyptians visiting the temple, and later, more mischievous visitors adding their graffiti in 1908 and again in 1921. Though I might not have enjoyed that first visit outwardly, I always remember it every time I visit the room today. And in case you didn’t pick up on that, the temple is still there, 16 years later. Which only proves that mothers can be very good in the art of lying to their children.