Living downtown, I have seasonal walking routes. In the dead of winter I like to walk by storefronts to window shop and because I know they will be shoveled and salted to near perfection. In the spring, I’ll take 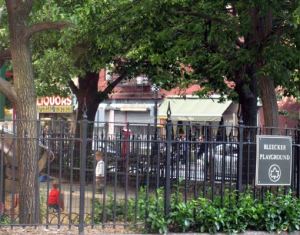 any route that has me walking by the Chelsea flower market. Even when it’s still early spring, it’s nice to smell and see the promise of summer in all of the beautiful flowers and small trees. Summer brings me back to the storefronts, hoping I’ll time my passing correctly with that of a customer entering/leaving the store — a cold blast of air-conditioned air hits the spot during a humid day. But my favorite walk has to be past the Bleecker Street Playground. A decently-sized island of childhood bliss, the park boasts sandboxes, swings, playground equipment and, sprinklers!!! The playground’s happy hour is right after the 3:00 school bell. Moms, nannies, babysitters and (more & more) Dads stand around and chat pleasantly with other parents while their children play at complicated imaginary games.

As a 20-something with no immediate thoughts of motherhood, you would think the idea of passing a gaggle of post-school children would irritate me, interfering with the music coming from my iPod, but the writer in me takes over as I watch them play and I’m fascinated by what they create. Their imaginations are so strong and their visual sense so acute, I think

they might make better authors of fiction than their adult counterparts — if not for nap times interfering with their workday.

Walking by the playground is a bit like listening to a pit orchestra warming up before a show. A few high squeaks, low moans and whines, and the clank of the wrought iron gate greeting the latest entrants into the park. The sense of electricity and excitement cannot be denied. Bleecker Street playground has a particular smell to it as well. Unlike the flowers that dot the nearby corner market, the park yields the sweet scent of child perspiration, the fragrant green leaf and bark mix of trees, and the light spritz of NYC water mixed with a rusty odor from the hundred-year-old pipes.

Chaos ensues when Mr. Softee pulls up alongside the curb. Children screech with delight — so excited are

they to see the promise of sugar, that they run, wet from the sprinklers and shoe-less, onto the city sidewalk (I have to admit it makes me squeamish to think of all the germs their innocent little feet are picking up). But no matter, these children are oblivious to grit and grime and focused on how to get their adult in charge to fork over ice cream money. You can aways tell the parents from the nannies: parents carry wholesome snacks, while the nannies have already attempted feeding their charges the health food, only to be denied. Ice cream offers those caretakers the promise of ending their day without anymore (ahem) meltdowns.

While passing the park gives me joy, it’s also mixed with a little bit of melancholy. Because after all, who doesn’t want to be that young again? If not for just one afternoon.