All The Sad, Young [and Middle-Aged] Literary Types 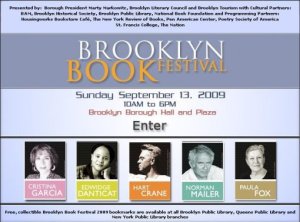 Crowds descended upon Brooklyn Borough Hall/Plaza and Columbus Park today for the Brooklyn Book Festival (btw, poor website and flyer layout, BBF! The microscopic signs on the vendors didn’t help, either). I rode the 3 train to Brooklyn for the book festival’s “Literature in a Digital Age” panel. Per my reading of the panel description, this what I thought I was going to hear:

Some say the “age of the book” is ending and a glorious new “digital era” is dawning. Others turn the page and keep reading. How do new forms of media affect our literary culture, and how do writers and publishers adapt to them? Featuring John Freeman (The Tyranny of Email), Dwight Garner (Read Me) and Sarah Schmelling (Ophelia Joined the Group Maidens Who Don’t Float: Classic Lit Signs On To Facebook). Moderated by Maud Newton, blogger of maudnewton.com.

Before I dissect the panel, I need an aside in order to talk about my admiration for Maud Newton and her website. Newton is, and has always been, my favorite literary blogger. I stumbled upon her blog in college and it still remains as the first entry I put onto the bookmarks bar of every computer I’ve had since. When I read her blog, I feel as if I’m a breath away from turning a page instead of clicking my computer’s track pad. She is the internet’s throwback to the printed word writer. And, apart from myself, she was probably the second American to discover the incredible Scottish writer [my favorite living writer], A.L. Kennedy … and one the first to blog about her (this isn’t the earliest piece Maud wrote about her, but it has the best ALK-related links). As a panelist for the Literature in the Digital Age event, Maud would have been a wonderful choice and fulfilled every aspect of literature in the digital age (she blogs, she tweets, she reads books on her iPhone, etc).

As a moderator, however, Maud fell short of engaging the crowd. The conversation she started felt too intimate for such a large space. So much so, that the panelists physically turned their bodies away from the audience to engage with her personally. Maud is also high-literary minded, in that it seems the printed-on-paper word is her only god. This would be fine, but not for the moderator of a panel who needs to keep an open mind and press questions on panelists about the various facets of the digital age and how it affects books — including the buying and selling of books — and how authors engage with their audiences.

The panelists represented a tiny slice of internet pie. Freeman and Garner may write online (sometimes) but they are still journalists and writers of the old school. Even Schmelling’s work is primarily in print. As a result, the panel felt like a dusty old paperback that’s been sitting for too long on a high shelf at The Strand. What they were missing was someone more acquainted with social networking, digital media and the publishing world. Perhaps a marketing head (or even assistant) at one of the big houses, a digital media strategist, or even a blog/Internet-savvy publicist. Ideally, they should have had someone from Harper Studio, where they are changing the face of book publishing and how authors (and imprints) build audiences & interact with their readers.

An additional ingredient that may have helped keep this book panel from the bargain bin would have been to have someone under age 30 representing some aspect of the publishing industry. Let’s face the truth here, my generation (the Net Generation) has grown up with computers. I’ve spent most of my life carrying around everything from floppy discs in my backpack to USBs on my key ring and Google Docs housed somewhere in cyberland. Though panelist John Freeman didn’t appear to be too far off from 30 — a quick Google search only turned up the phrase “young editor of Granta” — he isn’t savvy to new media and confessed Granta has only started tweeting recently. Granta is online, but like the New Yorker, with limited access, and no pay by the article option to unlock individual pieces.

In addition to these discrepancies, none of the panelists has ever read a book on an e-reader. I believe it was Garner who offered a sliver of hope to the rest of the dusty paperback panel: a reader will soon reach up onto the high shelf and buy them: “Readers are up 5 percent from last year. People are putting aside more time at the end of the day to turn off their computers and read, offline.”

I’m not certain where this statistic came from, but I’d like to believe it’s true. We can all use the break from the backlight of a computer. But when I log off, I turn on my Kindle. It reads like a book, there’s no backlight (it’s all ambient light), and it saves me time, money (at $299, and bet $7.99 and $10 per book, it’s already paid for itself twice over), space and it’s convenient — all things a New Yorker living in the digital age (and in a city-sized apartment) can’t live without.
–Downtown

P.S. I was a little disappointed to hear Maud Newton say one of the reasons she started her blog was so she could avoid having to interact with people face-to-face. That’s how people thought when blogs first started in the 1990s. It was a way to share your words, but hide behind them as well. Now the internet brings people together: Reuniting friends, allowing for people across the country or the world to collaborate, or nearly missed connections the chance to bump into one another or even, the opportunity to avoid each other.