“On any person who deisres such queer prizes, New York will bestow the gift of loneliness and the gift of privacy,” revered columnist for The New Yorker, editor of The Elements of Style and beloved author of children’s classics including Charlotte’s Web and Stuart Little, E.B. White wrote in his essay, Here is New York, in 1949.

Guess that’s why White is such a legend and received a Pulitzer Prize for the body of his work in 1978.

There’s a story in today’s City section of The New York Times that captures White’s sentiments.

A Life, Interrupted by REBECCA FLINT MARX and VYTENIS DIDZIULIS, tells the story of a 23 year-old school teacher’s August 2008 disappearance, her subsequent rescue from the waters off Staten Island by ferry workers (man, the ferry operators are busy and talented) and how Ms. Upp is coping with her re-entry into city life. According to the article, she encountered dissociative fugue, also known as the “Jason Bourne” affliction. The medical condition, according to the Times, is “characterized in part by sudden and unexpected travel combined with an inability to recall one’s past… (it) demonstrates the glasslike fragility of memory and identity.” The common thread is more than simply being rescued from the water…

The story reminds me of a fictitious one drafted by a writer/entrepreneur/mom friend years ago about a “superwoman” who was pissed when there wasn’t any milk for her Saturday coffee. She ran to the market in a huff with a few dollars in her back blue jean pocket, identificationless, and disappeared. Was she abducted? Was she in an accident? Or was she so fed up with being everything to everyone she wanted to start anew, leaving her loving husband and kids behind? Maybe, like Mr. Bourne and Ms. Upp, she had dissociative fugue. Who knows. Wonder where the mom is now?

My guess is the mom is surrounded by her family in New York, living a life of loneliness and privacy, or on an ashram in India. I doubt she’s made her way to a developing country to teach children how to read, as rewarding as that might be. Kind of ok when it’s just you, but when people care about you, love you and rely on you, it’s not ok. It’s better to ask for help. Hard as it may be. The superwoman needed a moment of composure and realized, as a mom, she had to grow up. Selfless as that may be…

Fortunately for her friends and family, Hannah Upp’s Times story ends happily. Where she goes from here, that fine line between leaving childhood behind and becoming and behaving like an adult is the next chapter. I wish her well. It’s not easy.

The Best Things in Life Are Free

I met a friend visiting from the west coast for drinks tonight at the Campbell Apartment. It was a lot of fun to catch up and finally see her on my coast, for a change. As the evening began to wind down, I asked her what her older daughter was doing for the summer. “She’ll be living in New York, actually,” said my friend. “And interning a bit with a friend’s father’s company.” We began talking about all the things her daughter should see and do while she’s in town. I mentioned how many free things there are to do and take advantage of. I was met with an interesting, candid response, “Well,” said my friend, “these girls are affluent, so I doubt they’ll be doing anything like that.” She wasn’t wrong with what she said, and it wasn’t said offensively, simply stated as a fact. And the more I thought about it, the more I realized how much that sucks in a way. As great as it is to see New York from a position of wealth, it’s also fun (though sometimes difficult) to see it when you don’t have a ton of money, especially when you’re young. I could wax on poetically, but because it’s late, and I’m tired, here’s a list of the things one could miss if they didn’t take advantage of a “free” New York:

Granted, all of these things could be experienced from town cars, taxis and perhaps even on their own two feet. But sometimes when the experience comes easily, it doesn’t mean as much or feel as rewarding. Like coming into a warm, cozy apartment after walking ten blocks from the freezing cold subway, to finding a way to get drinks for free, or getting into an event when you don’t have tickets. Those things just feel so good. And, I’m sure there are 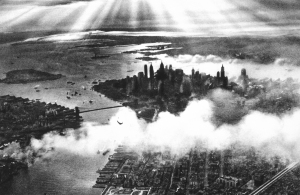 experiences that these girls will have that most New Yorkers never will in their lifetime. But, more than anything, in New York it’s the possibility of what you may encounter and the unexpected that you do encounter that makes this city so fascinating. The trick is do it all, the free, the not-so-free and the down-right expensive. Open yourself up to it all, as much as you can, and hold on tight.
–Downtown