A Carousel of Time

Yesterday a child came out to wander …

By the start of 2006, I had officially shed my past. Well, at least my career past. I no longer “worked in film,” or “used to work in film.” I was a book publicist and freelance 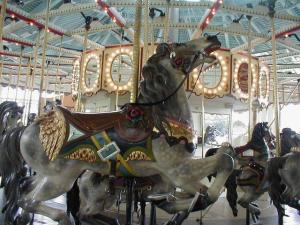 researcher. I had never know any other life besides film and, after a particularly insane Devil Wears Prada moment with my boss, I knew I had to give myself a chance to see what else was out there. So, I joined a the publishing arm of a semi-corporate, family-friendly company.

The people I worked with had vague ideas of what I had done before. When they complained about not being able to place a book review in O Magazine, I silently smiled and remembered when I had that secret assistant power to get Oprah on the phone. It took two little words, (my boss’s name) and magically, a short time later, a very familiar would come through the other end of the line.

While my co-workers talked of cold walks to the subway, my mind went back to the hours I spent in New Jersey sandpits in negative-degree temperatures trying to recreate the Gulf War — complete with high-speed camels, military cars and tanks and famous actors freezing their asses off in army fatigues, while making it all look very real.

I went from approving double-truck ads in Variety for Oscar season to listening to sales teams talk about the best day to place an ad for a book in the NY Times. From multi-million dollar budgets and hundred-million dollar grosses to selling a hundred thousand copies of a book. It was odd territory. Something — I was determined to believe — I could get use to. But everyday my cubicle became more and more claustrophobic, the corporate environment more stifling. At first I rebelled, trying hard to connect both of my worlds, but then I gave up and began hiding pieces of myself, censoring my thoughts, my actions, my passion, and my past. I started losing who I was and that scared me.

So I took the leap.

Then, the child moved ten times ’round the seasons …

I spent time as a research assistant for a writer. A little more creative and interesting, and it gave me time to lick some wounds and figure out what to do next.

I moved briefly into copy writing for a daytime talk show, where I learned my limit of suffering, restraint and how much I valued myself as a person. Though the ending was awful, it was possibly the best test of self-worth I’ve had thus far.

More time, more freelance writing, websites, developing and networking. But even that wasn’t enough. I was still drawn back to my past, my passion. It’s odd to know exactly what you want to do with your life when you’re 14 years old. Especially when you don’t really know quite what the industry is about to begin with. There’s a vague notion and a dream. I’m convinced for people like me, it’s pre-programmed in our DNA. It’s like air, water and love all mixed together — we cannot live without it.

Finally, I stopped denying myself and got back onboard the carousel.

Now I’m back to sixteen hour days, (sometimes weekends), constant craziness, complaining, laughter, and running the gamut of emotions on a daily basis. It’s exhausting, exhilarating and I love it. I’m working with people I worked with ten years ago on my first film (as a 17-year-old intern). A producer I worked with on my second feature — as a 22-year-old newly-minted college grad — whom I hadn’t seen since then, embraced me and exclaimed, “My god, you’re not a kid anymore!” She had taken me under her wing back then, my anxiety-ridden, lowly-assistant self, and always watched out for me. Now, I’m working on a different level. People are listening to me, respecting me. It’s interesting and weird and such a fulfilling experience. I guess, really, it’s just life. But sometimes it’s wonderful when it feels like so much more.
–Downtown

Tagged adult, age, carousels, circle game, everything i learned in life i learned from a joni mitc, growing up, life, time, wisdom, youth