Murder and Mealtime in the Mountains

“Hot Springs, Virginia is an extraordinary place – disarmingly rural, it is also the setting of one of America’s great resorts. Like the legendary French chateaux, The Homestead holds dominion over the striking Warm Springs Valley.” – Dining at The Homestead by Albert Schnarwyler, Eleanor and James Ferguson, 1989.

But in March of this year, a gunman entered the kitchen of the exclusive resort, fired his semi-automatic handgun and killed two of his co-workers. The murder suspect was never captured and is thought to be on the loose (or more likely, he is hiding in the lush forests of the region).

According to The Roanoke Times, Beacher F. “Hackney is a 5-foot-6-inch, 145-pound, balding white male. He wears glasses and was last seen wearing a light blue shirt, dark blue pants and jacket and black shoes. He is considered armed and dangerous.Anyone with information about Hackney’s whereabouts should call the Bath County Sheriff’s Office at 839-5300.”

Life in the hills is truly other worldly.

In addition to speaking with a Southern accent among the locals and many of their guests, some of the vocabulary never fails to affect me.

“Where are your people from?” said one woman to another as they sat by the outdoor pool.

“Mostly Roanoke,” said the other. “But some of my people live in Charlottesville.” As in VuhginYuh.

And then there’s the food. Out of this world in terms of richness and times past when TOP CHEF meant French chefs like Georges Auguste Escoffier.

The Homestead’s dedication to traditional cuisine is unlike most places I’ve been.

Whereas my family and I tend to stick to the no-carb, high protein diet, the Homestead is anything but that. Think eggs, butter, cream, veal, sauces (Béarnaise, Hollandaise, May-O-nnaise) made from stock that is made from scratch. There are cold soups (Vichyssoise or watercress) and hot soups (lobster or shrimp bisque, cream of asparagus). Coquilles St. Jacques au beurre blanc, baked oysters with crabmeat gratinée, Pompano in papillote, consummé. Any mention of the word vegetable equals beaucoup de butter and potatoes, maybe a pea or julienned carrot. The multitude of heavy items on offer all of the time strikes me as a real blast from the past. Julia Child would be in her element. Bear in mind that until the 1970s or somewhere not quite a lifetime ago (mine, at least), men and women dressed for dinner when the headed to the Dining Room. In these parts, that means black-tie and long dresses. Everynight.

Menus for the ladies (or whomever it is that won’t be picking up the tab) are printed without prices. Only the table host knows. That, too, is of another era.

For dessert, the operating word is flambé . Cherries Jubilee with kirsch, Crepes Suzette with Grand Marnier and brandy or Bananas Foster with Meyers rum, Cointreau and banana liqueur are prepared and flamed tableside, something my children have never seen before and most likely won’t again. They didn’t like the liqueur flavorings (and neither do I). The theatrics, on the other hand, are something to blog about. Dessert. 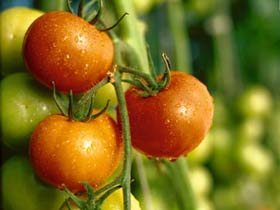 In the early 1900s, guests of the homestead traveled on horseback or in buggies to the Fassifern Tavern in Warm Springs. There, they enjoyed a luncheon menu that included southern fried chicken, corn pudding and fassifern tomatoes. Have you ever heard of such a thing? DEE-lish.

In case you feel like cooking, dt, I LOVE these toms.

Preheat oven to 300F
Put the toms with their juice into the saucepan, add sugar, salt and pepper and bring to boil over medium heat. While the toms are coming to a boil, mix the cornstarch with the cold water in the small bowl and set aside. When the toms are boiling, remove the saucepan from heat and slowly pour the cornstarch mixture into the toms, stirring constantly with the wooden spoon. When well blended, set the saucepan back over medium heat and bring the tomatoes to a simmer. Adjust heat so that the toms will cook gently for 10 minutes. Stir occasionally.

While the tomatoes are simmering, cut the bread into ½ inch cubes, set them on the baking sheet, and bake for 5 to 10 minutes or until lightly browned. When done, remove from oven and “reserve.” (!!!!)

Put the butter in the small saucepan and set it over low heat.

When the tomatoes have finished simmering, pout them into the baking dish, arrange the toasted bread cubes over the top, drizzle on the melted butter, and put the baking dish into the middle level of the oven to bake for 20 minutes.

The tomatoes can be simmered several hours ahead of time and wait in the baking dish for their final cooking. Top with bread cubes and butter just before baking.

This entry was posted in Uncategorized and tagged cooking, escoffier, Fassifern Tomatoes, french cooking, The Homestead, tomatoes. Bookmark the permalink.

2 responses to “Murder and Mealtime in the Mountains”