Living downtown, I have seasonal walking routes. In the dead of winter I like to walk by storefronts to window shop and because I know they will be shoveled and salted to near perfection. In the spring, I’ll take

any route that has me walking by the Chelsea flower market. Even when it’s still early spring, it’s nice to smell and see the promise of summer in all of the beautiful flowers and small trees. Summer brings me back to the storefronts, hoping I’ll time my passing correctly with that of a customer entering/leaving the store — a cold blast of air-conditioned air hits the spot during a humid day. But my favorite walk has to be past the Bleecker Street Playground. A decently-sized island of childhood bliss, the park boasts sandboxes, swings, playground equipment and, sprinklers!!! The playground’s happy hour is right after the 3:00 school bell. Moms, nannies, babysitters and (more & more) Dads stand around and chat pleasantly with other parents while their children play at complicated imaginary games.

As a 20-something with no immediate thoughts of motherhood, you would think the idea of passing a gaggle of post-school children would irritate me, interfering with the music coming from my iPod, but the writer in me takes over as I watch them play and I’m fascinated by what they create. Their imaginations are so strong and their visual sense so acute, I think

they might make better authors of fiction than their adult counterparts — if not for nap times interfering with their workday.

Walking by the playground is a bit like listening to a pit orchestra warming up before a show. A few high squeaks, low moans and whines, and the clank of the wrought iron gate greeting the latest entrants into the park. The sense of electricity and excitement cannot be denied. Bleecker Street playground has a particular smell to it as well. Unlike the flowers that dot the nearby corner market, the park yields the sweet scent of child perspiration, the fragrant green leaf and bark mix of trees, and the light spritz of NYC water mixed with a rusty odor from the hundred-year-old pipes.

Chaos ensues when Mr. Softee pulls up alongside the curb. Children screech with delight — so excited are 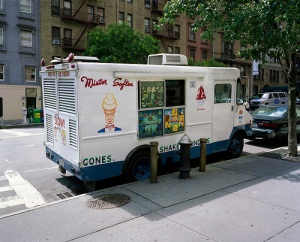 they to see the promise of sugar, that they run, wet from the sprinklers and shoe-less, onto the city sidewalk (I have to admit it makes me squeamish to think of all the germs their innocent little feet are picking up). But no matter, these children are oblivious to grit and grime and focused on how to get their adult in charge to fork over ice cream money. You can aways tell the parents from the nannies: parents carry wholesome snacks, while the nannies have already attempted feeding their charges the health food, only to be denied. Ice cream offers those caretakers the promise of ending their day without anymore (ahem) meltdowns.

While passing the park gives me joy, it’s also mixed with a little bit of melancholy. Because after all, who doesn’t want to be that young again? If not for just one afternoon.

So last week I took advantage of one of the MANY free events that occur daily in New York. I wrestled out of my work attire (jeans and a tee shirt) and dressed up all fun and “cable casuaI” (meaning just above jeans, just below high-fashion, but just cool enough & campy enough for a fake network awards show).

Yup, I attended the taping of Bravo TV’s A-List Awards as a member of the “casted audience.” I waited on line 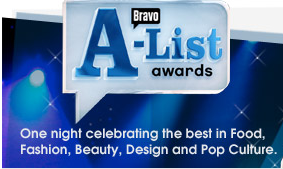 (and for my late-as-usual friend) for a hour to get inside. Finally, we were given orange wristbands and herded up to the balcony while those select few sitting below us had the benefit of an OPEN BAR! And, if you think that sucked, well you should have seen the show! This was the first (and hopefully last) time Bravo is taking a stab at an awards show. Unless they have some amazing Oscar-worthy editors, I doubt this program can be saved. The awards were too random — only six or seven were handed out — and in the words of host Kathy Griffin, “I’m the most A-List person they’ve got, how sad is that?” And, that statement (made at a Producer’s Guild talk the night before) was entirely true.

I watch my share of Bravo TV including, Project Runway, usually the second half of each Top Chef season the occasional Real Housewives of New York City (which, I swear was for work research) and of course, My Life on the D-List and the endless re-runs of Law & Order and I’m pretty good at following puzzles, connecting dots, etc, but even I had no idea what was going on. Not to mention WHO half the people there were (presenters and audience, alike). I think even an award recipient or two (hello, Anna Sui!) weren’t sure how

they got there or why. But, the best part had to be watching Bravo’s president, Lauren Zalaznick spend the entire show with her head down, typing away on her Blackberry. I think she must have been starting the damage control early. If Bravo was smart enough, they would have scraped the show idea and spent the money towards added more episodes of their Emmy Award-winning show, My Life on the D-List.

This past weekend we all witnessed a cultural phenomenon step beyond the confinement of a small screen to one decidedly larger. The women of Sex & the City are on display in theaters nation-wide. Even before all of us movie-going women have seen it, we’ve cast our ballot by standing on line to buy tickets, selling out screenings across the country. And, the movie itself does live up to all the hoopla and haute couture, 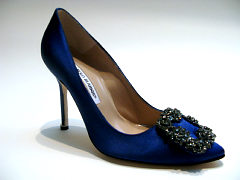 provided you abide by the law (authored by writer/director) Michael Patrick King, that women can in fact, have it all — right down to the peacock blue Manolos.

Though the movie dream is all fun and fluff, we know the reality for women is very far from the high heels and high-priced labels. And while Carrie & Co. make a box office killing, find their men, and themselves, we all file out of movie theaters and watch a different kind of romantic wooing occur on TV, in print, and online; there’s another race going on, one where the end result isn’t about finding the right man or the perfect apartment, it’s about winning the affections of a country’s citizens and super delegates. In this race, only one woman is standing up, in her heels and power suits, commanding an audience, flashing a smile and making promises for a better nation. And, love her or hate her, she’s the closest we’ve come so far to having a Madam President. Though midnight is looming for Mrs. Clinton, she’s still doing her darndest to romance us and probably will until the credits roll.

But like Carrie Bradshaw would say, “I can’t help but wonder, where are all the [wo]men?”” Where are the ones who will come after Hillary Clinton? The women who will stand on platforms along side of their male counterparts, pledging their devotion to our country, pitching their agendas and keeping our hard-won female rights in tact (hello, Roe vs. Wade).

These questions devise the premise of another film, also screening now, called What’s

Your Point, Honey? Directed by Amy Sewell (Mad, Hot Ballroom) and Susan Toffler, this documentary follows a group of ten young women, seven of which range in age from 18-21, and three ten-year-olds, as they look ahead to the future of women in power and politics. While Sex & the City features appearances from the likes of Candace Bergen and Andre Leon Talley, What’s Your Point, Honey, gives us cultural icons such as feminist leader and founder of Ms. Magazine, Gloria Steinem, who remarks, “it’s been my experience that girls ages eight to ten are as smart and wonderful and deep as they’re ever going to get and haven’t yet been messed up by the feminine role that’s going to take them till 40 or 50 years old to get out from under” (case in point, Sex & the City). And there’s Marie Wilson, founder of The White House Project, an organization whose aim it is to, “advance women’s leadership in all communities and sectors, up to the U.S. Presidency.”

The young women profiled won a contest sponsored by CosmoGirl! magazine, who partnered with “The White House Project,” a non-profit, to create Project 2024, which places seven girls in high-powered summer internships in various professions and industries (ironically one young woman worked in then-Attorney General Elliot Spitzer’s office). The hopeful outcome being that by the year 2024, one woman from each contest year will “grace the presidential debate podiums and town halls, providing choice, and getting beyond gender to agenda.” The CosmoGirl! interns span the country and beautifully represent the potential power and voice that come with the next generation of women in America. These girls may have the wit of Carrie, Samantha, Miranda and Charlotte, but their passion for social change runs deeper than any romantic comedy can, with career dreams that range from public service to stronger marketing messaging for women.

Much like Sex & the City: The Movie, What’s Your Point, Honey? doesn’t claim to deliver a message, rather its mission is ask the age-old question, with a post-Hillary spin: “can women have it all … and be President too?”